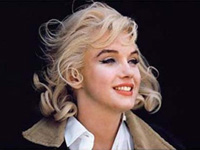 In a never-before seen home movie U.S. actress is seen smoking what a friend says was a marijuana joint.

In the 4-minute, 16mm color, silent film footage from the late 1950s, Monroe, the silver-screen sex symbol who died in 1962, is seen drinking wine and puffing on a cigarette passed to her while sitting with friends at a home in New Jersey. Monroe is shown laughing and at one point sniffs her armpit.

The filmmaker, who asked not to be named, told the reporters the actress was smoking marijuana.

"I got (the pot). It was mine. It was just passed around," she said. "It was not a party. It was just a get-together. You know, come over and hang out."

The filmmaker said she had kept the home movie in an attic for years, showing it only to FBI agents investigating Monroe's death.

Keya Morgan, a New York collector who is making a documentary of Monroe's death, bought the film for $275,000 and plans to put it up for sale on eBay this week. The filmmaker retained the copyright.

"This is the late '50s so she is already very famous, but this is a personal side of her we've never seen before," Morgan said."People have never seen her in such a relaxed pose."

UPI.com. has contributed to the report.