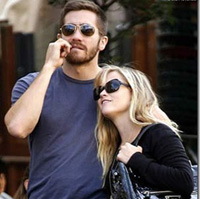 Rumor has it Reese Witherspoon and Jake Gyllenhaal have quitted but the actors laugh at silly gossips.

X17 reports Jake's assistant wheeled two large suitcases out of Reese's Brentwood house and took them over to Gyllenhaal's abode.

Whatever is going on between them, it should hardly come as a surprise, considering both Reese and Jake are Blind Vice Superstars.

The sweet little Reese Witherspoon has starred in her own Blind Vice, and Jake Gyllenhaal has too.

Reese Witherspoon, is an American actress and film producer. For her over 17-years career she has earned  an Academy Award, Golden Globe, BAFTA, and Screen Actors Guild Award for Best Actress in a Leading Role for her portrayal of June Carter Cash in Walk the Line.
The E!Online  has contributed to the report.