American Woman Finds Image of Jesus on Bottom of Iron

A Massachusetts woman who recently separated from her husband and had her hours cut at work says an image of Jesus Christ she sees on her iron has reassured her that "life is going to be good." 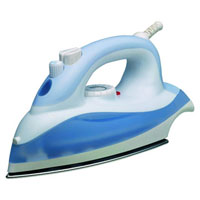 American Woman Finds Image of Jesus on Bottom of Iron

Mary Jo Coady first noticed the image Sunday when she walked into her daughter's room.

The brownish residue on the bottom of the iron looks like the face of a man with long hair, The Associated Press reports.

The 44-year-old mother of two told her daughters, expecting they would dismiss the likeness. But, she told the paper, they saw the features of Jesus Christ, as well.

"They were like, 'Mom, that's Jesus looking at us,'" Coady said, who has found new born faith thanks to her discovery.

According to the Boston Globe, she shared the photo on Facebook, and was reassured by friends that they, too, saw Jesus on the iron.

Although many people who claim to have found an image of Christ in an unlikely place try to cash in on their find - such as one person on eBay hoping to sell a potato chip for $3,000 they claim is graced by Jesus' face - Coady has no such intentions, despite being recently separated and facing financial hardships.

The secretary at a medical office - whose hours have been cut back - reportedly will put her iron away in the closet, and simply buy a new one, New York Daily News reports.