Robbie Williams' live radio proposal to his girlfriend was a joke, his spokesman has said. 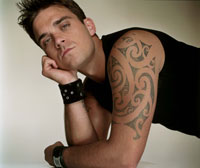 The 35-year-old former Take That singer was being interviewed on Sydney station 2DayFM when it emerged his girlfriend Ayda Field, 30, was also in the studio.

The show's co-host Jackie Henderson - known as Jackie O - mentioned the city was famed for celebrity proposals and asked if Williams "had anything to share," Sky News informs.

According to Reuters, presenter Jackie Henderson was telling him that Sydney has a bit of a reputation for proposals with celebrities at which point Williams turned to Field and said: "Is there anyone you want to get married to?"

She replied: "This is so awkward."

To which Williams said: "Will you marry me?"

When asked whether Williams was serious, his London-based spokesman said: "He did say it, but in a jocular manner. They are not engaged."