There could be less jingle in the Salvation's Army's hallmark red kettles this season. The charity is testing kettles that take debit and credit cards. 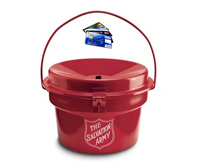 The growth of so-called "plastic kettles" comes as fewer shoppers carry cash. Bell ringers who stand outside stores during the holiday season say that more and more shoppers are shaking their heads and smiling as they pass by, apologizing for not having spare change or cash to drop in the red kettles.

Last year Salvation Army tested the credit machines in two cities, Dallas and Colorado Springs. This year the plastic kettles will be tested in more than 120 cities.

The kettles that take credit don't look any different. But next to the metal red kettles are wireless card readers that resemble do-it-yourself readers at gas stations. The machines print two receipts, one for the donor and one to drop in the kettle. Salvation Army pays credit-processing fees same as any retailer.

The charity says its red kettles brought in more than $130 million nationwide last year, an increase of 17 % from 2007. Salvation Army officials aren't sure how much of the increase came from credit or debit donations.

The charity says that the old-fashioned kettles aren't going anywhere, because shoppers and especially children enjoy dropping coins as they shop for the holidays. Even Salvation Army groups that are using the card machines say they're a small part of the overall fundraising effort.