One of the benchmarks of progress in digital animation has been the increased ability to animate fur realistically. 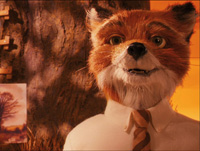 Anderson loves the handcrafted look, and you could spend much of Fox being hypnotized by the way the real fur on the animal figures ripples and moves in little waves that have nothing to do with the movements of fur in real life and everything to do with the way stop-motion fur in old movies and television specials moves.

Fox is not a kids’ movie exactly; it’s more like a movie for adults with an intense nostalgia for their inner child, with some Anderson-specific family dynamics thrown in for good measure. Corduroy-suit-clad Fox (Clooney, whose voice sounds like corduroy), who long ago retired from thievery to settle down with his wife (Streep) and son Ash (Schwartzman), feels the pull of his old life and plots a series of heists on local farms. Meanwhile, miserable Ash has daddy issues (not in the original Roald Dahl book) and a fierce but one-sided rivalry with his ultra-suave cousin (Eric Anderson).

The Time Out Chicago has contributed to the report.