Oprah Winfrey to Interview Obama for His Holiday Special

President Obama will give interview to Oprah Winfrey for a holiday special on ABC called "Christmas at the White House: An Oprah Primetime Special" 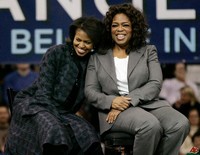 Oprah Winfrey to Interview Obama for His Holiday Special

The talk show host, who recently announced that she would end her show in two years, is fresh off a high-profile sit down with former GOP Vice Presidential candidate Sarah Palin. The special with the president will reportedly include the interview with Mr. Obama and First Lady Michelle Obama as well as a White House tour.

The special is scheduled to air on Sunday, December 13th, CBS News reports.

"The intimate, informative and entertaining hourlong special will include a one-on-one conversation with the president, marking the first time Oprah has interviewed him since he took office, as well as an exclusive sit-down interview with the first couple," it said.

The special "will showcase behind-the-scenes preparations as the White House gets ready for the holiday season," the Web site said.

Winfrey, who supported Obama in his presidential bid and this month interviewed defeated GOP vice presidential candidate Sarah Palin, recently said she will stop hosting her syndicated talk show in 2011 to focus on launching an Oprah Winfrey Network, CNN reports.

It was also reported, the other "O" is set to tape her first sit-down with Obama at 1600 Pennsylvania Ave. next week for the show, featuring the man she dubbed "The One" during the Democratic primaries.

A soft interview from one of his most famous backers would be a boon to Obama, whose approval numbers just dropped below 50 percent for the first time in a Gallup poll.

It won't be the first time Oprah has lent a hand to Obama when her fellow Chicagoan was in need.

Her packed rallies for him in Iowa and South Carolina helped Obama surge past Hillary Rodham Clinton during the primary campaign , New York Post reports.