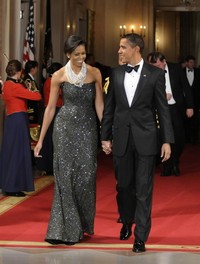 The US Secret Service is investigating how the couple, who its spokesman, Ed Donovan, confirmed was not on the guest list, managed to breach security and attend the 300-strong event, guardian.co.uk reports.

The Washington Post, which first reported on their evening out, said the Salahis were well-known in the Virginia horse-country set and were being considered for the Bravo reality TV show "Real Housewives of D.C."

In an interview with CBS' "Early Show" in September, Michaele Salahi said, "President Obama has made it very accessible for anyone to visit the White House, so that's like a big thing right now." The CBS interview was part of a segment on potential candidates for "Real Housewives of D.C." but never was aired.

The Secret Service learned about the security breach Wednesday after a media inquiry prompted by the Salahis' online boasts about having attended the private event, Donovan said.

One of the many photos from the dinner posted on Michaele Salahi's Facebook page shows the couple with a smiling Biden. In other photos, they appear alone or together with Emanuel, Fenty, Couric, Rep. Ed Royce, R-Calif., and three Marines in their dress blues, The Associated Press reports.

There are no pictures posted of Tareq and Michaele with the president, but one imagines that was not for want of trying.

Meanwhile, Michaele Salahi's Facebook page – she has a fan page rather than a profile – was dutifully updated within hours of the White House dinner. Salahi, a former model and cheerleader who had 2,213 "fans" at the time of writing, posted a photo album named "White House State Dinner," showing herself and her husband posing with America's great and good.

The question is: In an era when ordinary Americans are screened and scanned every day, how could a breach this big take place at what is thought to be the most secure spot in the country?

The Obamas hosted their first state dinner and it was the hot ticket in town. So hot that two aspiring reality TV stars apparently crashed the party.

The Secret Service is looking into how the couple got past security, but the threat was low, because they went through the same weapons screening as all guests.

One official said, "These individuals went through magnetometers and other levels of security, as did all guests attending the dinner."

They reportedly left before being seated for dinner, NECN reports.