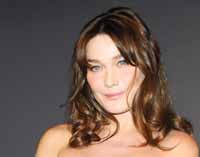 Woody Allen made France's first lady, Carla Bruni-Sarkozy, an offer she could not resist.

The former supermodel and wife of President Nicolas Sarkozy says she's agreed to be in the famed director's next film, but doesn't know what role he has in store for her and admits she could be a terrible actress.

Bruni-Sarkozy confessed that she could not  miss an opportunity like that. "If this ever comes about, it'll be a great experience," she said.

The legendary film-maker asked Bruni-Sarkozy not to make another film before his.

Bruni-Sarkozy, noCarla Bruni-Sarkozyw a singer-songwriter, has largely shelved her concert tour plans to make way for her responsibilities as France's first lady. Reported by the Associated Press.