Cruise and Diaz are not only good actors, American favorites, but also very lucky people. 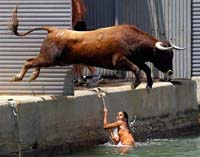 Seven bulls being used on the set of a film starring Tom Cruise and Cameron Diaz have broken free in Spain and slightly injured two people.

Cruise and Diaz were not at Sunday's rehearsal. The actors are scheduled to arrive in the city of Cadiz in southwest Spain for the filming of the "Knight & Day" movie next weekend.

Two unidentified women were slightly injured by the bulls as they broke free from the downtown location and ran through streets to a nearby beach. It was not immediately clear if the women had anything to do with the film.

Filming in Cadiz was to begin Monday, but local government spokesman Ignacio Romani says it has now been suspended until further notice, according to the Associated Press' report.