Janet Jackson Looking Back at Michael and Herself

Janet Jackson seems helpless, trying to interprete Michael's drug addiction. Too little time has passed to heal all sorrows about the pop-star who is merely her brother. 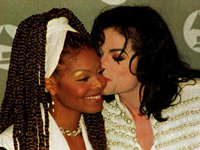 Janet Jackson Looking Back at Michael and Herself

According to her words,  she recognized her brother Michael's drug problem, and tried to help him, but that he rebuffed those attempts to intervene. "You can't make 'em drink the water," Jackson told ABC News in an interview airing Wednesday. When asked if her brother was in denial about his addiction, she replied, "Possibly."

Prosecutors in Los Angeles are weighing charges against Murray, who told police he administered a powerful anesthetic to the singer shortly before he died.

During the interview, the 43-year-old Janet Jackson spoke of her upcoming diet book, "True You," which chronicles her lifelong struggle to control her weight.

She has gained some mastery over her self-image, she said, after years of "just picking yourself apart all the time because you're so used to being kind of picked apart."

She said she hasn't seen "This Is It," the new documentary film spotlighting her late brother as he prepared for the concert tour that would've taken place last summer.