Johnny Is The Best Again

Just look at him and you won't wish to argue with editors of People who named Johnny Depp "sexiest man alive" for a second time. 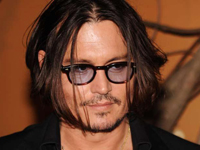 Johnny Is The Best Again

On Wednesday the heart-breaking  actor joined  an elite club of double honorees that includes George Clooney and Brad Pitt.

People magazine described the swashbuckling "Pirates of the Caribbean" movie star as "the king of cool with the killer cheekbones". Depp, who also took the title in 2003, succeeded 2008 winner Hugh Jackman.

Asked why Depp, 46, had won a second time, People senior editor Kate Coyne told the CBS Early Show: "He was sexy ten years ago, he'll be sexy ten years from now. He appeals to multiple generations of women -- and for many different reasons to different kinds of women."

Depp's recent roles include 1930s gangster John Dillinger in "Public Enemies" and the murderous London barber "Sweeney Todd". His next screen role is as the Mad Hatter in director Tim Burton's adaptation of "Alice in Wonderland" which is due for release in March 2010.

In real life Depp, 46, is also a committed father of two.

"He's sort of everything," Coyne said. "He's a guy's guy, kind of a bad boy, he's a respected artist and actor. You know, he's got a little bit of everything."