Sarah Palin opened up about her upbringing and her disagreements with Sen. John McCain's aides on how to tackle issues in her interview with ABC News' Barbara Walters. 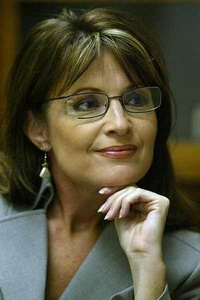 Growing up near the top of the world, the former Alaska governor describes a God-fearing, frontier kind of life in which she and her family raised chickens, caught fish and -- as everyone knows by now -- hunted moose.

In her new book, "Going Rogue: An American Life," which hit bookshelves Tuesday, Palin writes about moose eyeballs -- how her dad shot and carved up a moose and put the eyeballs in her hand, ABC News reports.

News agencies also report, now that Palin has stopped pretending to be a politician, she’s back to being, uh, whatever she was before.

Sarah Palin was like a sparkling celebrity holiday gift in the Oprah interview. She was just shining with the thrill of being on that stratospheric studio sofa that would rocket her book sales even further off the charts. The only veiled moment of impatience that dimmed her gorgeous stare was when Oprah opened up with whether Palin thought she had snubbed her during the ’08 campaign by not asking her on the show. You could see Palin thinking, as we in the audience were, “Huh? Why the eff are we wasting time talking about you?” msnbc.com reports.

In the meantime, hundreds of people are lining up at a Michigan bookstore for a chance to meet Sarah Palin as she kicks off her national book tour.

Some camped out overnight to be among the first to get wristbands Wednesday morning from the Barnes and Noble bookstore in Grand Rapids.

The orange bands will give them an opportunity to get the former Alaskan governor and 2008 Republican vice presidential candidate to sign their copies of her new book, "Going Rogue," at a three-hour book-signing event in the evening.

Barnes and Noble spokeswoman Maddie Hjulstrom says for security reasons, she can't say how many people are expected at the book signing, The Associated Press reports.