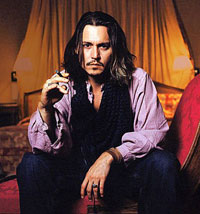 Depp nudged aside Jackman to get the coveted endorsement from People magazine Wednesday. It's the 46-year-old actor's second time as "Sexiest Man Alive." He also won in 2003.

Kate Coyne, senior editor at People, said on CBS' "Early Show" that Depp has achieved an almost "iconic status in terms of sexiness."

Last year's winner was "Wolverine" actor and Aussie, Hugh Jackman. This year's "Sexiest Man Alive" has had female fans swooning since his days on television’s "21 Jump Street" and his fan base continues to grow.