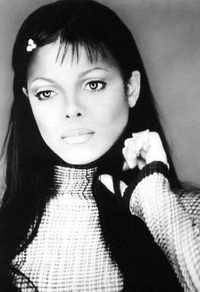 The collection feature her biggest hits, single mixes, and collaborations. The 2-disc set features thirty-three of her international smashes, plus the new dance hit "Make Me."

It includes her past #1 hits like "What Have You Done For Me Lately," "Miss You Much," and "Love Will Never Do (Without You)," all the way up to last year's #1 dance hit, "Feedback," and the new single "Make Me." Target includes a bonus remix of "Make Me" by Moto Blanco, while iTunes has an exclusive remix by Bimbo Jones.

The set also includes her hit collaborations over the years, including "Scream" with Michael Jackson, "What's It Gonna Be?!" with Busta Rhymes, and "The Best Things in Life are Free," with Luther Vandross, AHN reports.

Meanwhile, in an interview with ABC News, Janet Jackson said she thinks that Dr. Conrad Murray is responsible for death of her brother, Michael Jackson.

"He was the one that was administering," Jackson said. "I think he is responsible." The singer also told ABC's Robin Roberts that Murray should not be allowed to practice medicine.

A spokeswoman for the doctor, Miranda Sevcik, told The Associated Press that Murray maintains he did not prescribe or administer anything that would have killed Jackson, WIS reports.

News agencies also report, Janet Jackson doesn't want Dr. Conrad Murray to continue practicing medicine -- because she doesn't want the man she holds "responsible" for her brother's death to strike again on "someone else."

Janet also said she doesn't know if Murray was the only doctor hooking Michael up with drugs -- but added "the truth always prevails," TMZ.com reports.

It was also reported, last week, when John G. Branca and John McClain were named the executors of Michael Jackson’s estate by a Superior Court judge in Los Angeles, one estate expert was quoted as saying the decision would ensure “there won’t be any further challenge.” But now the singer’s father, Joe Jackson, is planning to challenge the decision, Agence France-Presse reported. Citing legal papers filed on Friday, Agence France-Presse said that Joe Jackson plans to appeal the appointment of Mr. Branca, a lawyer, and Mr. McClain, a music executive, in the California Court of Appeals. Joe Jackson was left out of his son’s will, and the Superior Court had said he had no standing to challenge it.

On Monday, a spokesman for the Los Angeles city attorney said that the city is still seeking reimbursement for the $3 million that it spent on a public memorial for Michael Jackson at the Staples Center on July 7. John Franklin, a spokesman for Carmen Trutanich, the city attorney, said the city expects repayment from the concert promoter AEG, which owns the Staples Center, The New York Times reports.