Employees of Paul Allen's investment firm, Vulcan, got sad news about their chef. The co-founder of Microsoft has non-Hodgkin’s lymphoma. 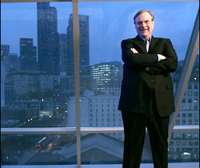 This month, Mr. Allen, 56, received the diagnosis of diffuse large B-cell lymphoma, a relatively common form of lymphoma, according to the message, sent by Jody Allen, Vulcan’s chief executive and Mr. Allen’s sister.

Mr. Allen received a diagnosis of Hodgkin’s disease in 1983, and left Microsoft for radiation therapy and a bone marrow transplant. He never returned to the company’s day-to-day operations, but his stock in the rapidly growing software firm made him the 17th richest man in the United States, according to Forbes magazine’s annual list.

“This is tough news for Paul and the family,” wrote Ms. Allen. “Paul is feeling O.K. and remains upbeat. He continues to work and he has no plans to change his role at Vulcan. His health comes first, though, and we’ll be sure that nothing intrudes on that.”

In recent years, Mr. Allen has become known as one of the most aggressive and inconsistent investors in technology. Apart from his ownership stakes in sport teams like the Seattle Seahawks and Portland Trail Blazers, Mr. Allen invested heavily in Charter Communications, the cable company, and Digeo, which made set-top boxes. Both companies sought bankruptcy protection this year.

Mr. Allen also financed Space Ship One, a rocket-powered aircraft that in 2004 became the first privately financed human flight to reach suborbital space, according to the New York Times' report.