Kristen Stewart Speaks about Herself and Her Work in "Twilight Saga"

Kristen Stewart was not herself because of strain of the nerves talking about "Twilight" a year ago. She's far more confident these days as "The Twilight Saga: New Moon" is to be released in movie theaters Nov. 20. 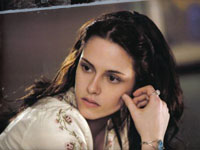 Kristen Stewart Speaks about Herself and Her Work in "Twilight Saga"

"I think I've gotten a lot more comfortable with talking about myself. I couldn't finish a sentence because I was so concerned about how it was going to sound and I didn't want to come across insincere about something that I really love to do," Stewart says. "I realized that instead or refraining from saying things, I should have said 'I put my heart and soul into this thing and I love it' instead of the really logical, over-analytical reason why I love it."

She had to get comfortable because Stewart and her fellow "New Moon" co-stars, especially Robert Pattinson, with whom she's been romantically linked, have become constant media fodder.

Stewart's take on all the tabloid attention is that it is "false" and "mean."

"It's like a ridiculous show. Like a soap opera that seems real, but you're not quite sure," Stewart says. "It doesn't bother me. I don't take it personally, because I've had so much experience it's gotten easier to talk about the work."

It's helped that the 19-year-old Stewart has had other acting jobs, which are a calming eye in the middle of the media hurricane. Along with filming "New Moon" and the next movie in the series, "Eclipse," she also has made "The Runaways" with "New Moon" co-star Dakota Fanning. Her quirky "Adventureland" was released this year.

The "New Moon" filming was the best distraction, because it forced Stewart to go into a very different acting direction. While the first film was about finding true love, "New Moon" is about her character Bella trying to rebound from the emotional crash that comes when love is lost.

Stewart says, "What I really love about 'New Moon' is you really see this girl build herself back up, and by the time she makes this rash decision to spend eternity with a vampire, she's in a position that you actually believe it. You are old enough, you are mature enough to know. You've lived life. She grows up."

While Stewart has been distracted by her work, the fans have remained focused on the film and its actors. They've been ravenous to know every small detail. Stewart got a better handle on dealing with all that attention when she stopped trying to be so guarded about what she said.

"I'm always going to keep what's important to me," she says. "People are always gonna want more and I completely understand, considering that we're playing characters that are so coveted by so many people. I get why they want to know more about us and they want us to be together (romantically) and all of that. I just have to sort of not think about it." Reported by News and Observer.