A text reading "Thatcher has died" sent Canada into a diplomatic panic - until they realised it was about a cat. The message was sent by the country's transport minister, who named his beloved moggy after his political heroine. 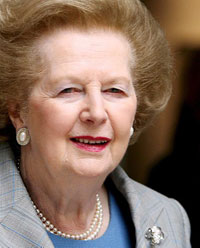 But officials thought it referred to the demise of former British PM Maggie Thatcher, now 84, according to Daily Record.

During a tribute to Canada's military in Toronto, some 1,700 luminaries, including Canadian Prime Minister Stephen Harper, were in the middle of dinner Tuesday night when smart phones throughout the room began to buzz with the news: "Lady Thatcher has passed away."

Dinner chatter abruptly veered to expressions of shock and reminiscences of Margaret Thatcher, the 84-year-old former British prime minister, as news of her apparent passing spread like wildfire.

Harper's aide Dimitri Soudas, back in Ottawa, was dispatched to confirm the news and start preparing an official statement. Soudas immediately e-mailed his contacts at Buckingham Palace and in British Prime Minister Gordon Brown's office.

They had no idea what he was talking about. Lady Thatcher, they informed an embarrassed Soudas, was still very much alive.

About 20 minutes after the rumor mill started churning, a corrective e-mail message began to circulate among the diners at the hall.

Turns out it was Transport Minister John Baird's beloved 16-year-old cat, whom he'd named Thatcher out of admiration for one of his political heroes, who had ceased to be.

Soudas is said to have quipped since: "If the cat wasn't dead, I'd have killed it by now," The Associated Press reports.

Margaret Thatcher, Baroness of Kesteven, is currently 84 and is alive and well. Her last public appearance was on Wednesday, when she attended the Remembrance Day service in Westminster Abbey.

She served her country as Prime Minister from 1979 until 1990 when she was forced from office by her cabinet, IBTimes reports.