The nanny who photographed Cindy Crawford's then-7-year-old daughter bound and gagged may be in hot water for her role in the ensuing extortion attempt. 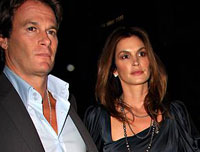 The FBI yesterday said criminal charges had not been ruled out for the unidentified woman, who called the photo a "prank."

According to MiamiHerald.com, German man was charged with trying to extort money from Cindy Crawford and husband Rande Gerber over a photo of their daughter, authorities said.

Edis Kayalar, 26, has not yet been arrested. He was recently deported to Germany.

The photo was purportedly taken by the couple's former nanny earlier this year and shows the girl, then 7, tied to a chair. Kaia told her parents that the nanny took the picture as part of a ''cops and robbers'' game, according to an affidavit.

Court documents report that Kayalar stole the photo from the nanny and repeatedly sought to get money from Crawford and Gerber, starting in July. Kayalar was deported to Germany but apparently kept up the pressure for money.

The case comes on the heels of two other celebrity cases this year.

In October, a new trial was ordered in the case of two men accused of demanding $25 million from John Travolta to keep them from releasing private information about the Jan. 2 death of Travolta's 16-year-old son Jett.

On Oct. 1, David Letterman told his television audience that he was being blackmailed over sexual affairs with female staffers working on his show, Chicago Tribune repors.