Robert Pattinson says he hasn't really been affected by the excessive attention he's attracted since "Twilight." 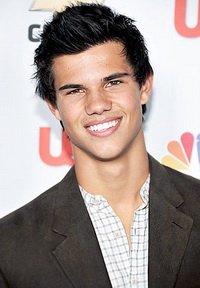 "I still feel I'm pretty much exactly the same, which is maybe not a good thing," Pattinson, who plays the always brooding Edward in the "Twilight" movies, says with a smile.

The actor is having a good time, which is easy when you go from being a bit player in a "Harry Potter" movie to being the obsession of fans around the world and having a steady paycheck.

He's been on three different sets since Jan. 14, including "The Twilight Saga: New Moon" and the follow-up, "Eclipse." (The third film was "Remember Me" with Pierce Brosnan and Chris Cooper.) And he'll be on movie sets all next year, including the scheduled fall start for filming on the fourth "Twilight Saga" film, "Breaking Dawn," MiamiHerald.com reports.

Meanwhile, the only way Taylor Lautner was going to reprise his "Twilight" role of Jacob Black in "The Twilight Saga: New Moon" was to change.

That's because Jacob has to evolve from being an average teen-age boy to a muscled young man who transforms into a wolf.

"Jacob transforms a lot in 'New Moon,' not only physically but mentally and emotionally as well. So it was a matter of getting into the gym and eating the right foods and also reading and studying the book and my character," Lautner says.

Lautner mixed exercise and high-calorie meals to build the body that gets revealed repeatedly in the movie. The more than 3,200 calories he needed daily to be able to add the muscle mass was accomplished by eating every two hours, MiamiHerald.com reports.

News agencies also report, it's no surprise "New Moon" leading lady Kristen Stewart got a little worked up filming the sequel, famously telling Entertainment Weekly that she sat in her car sobbing before her breakup scene with Robert Pattinson. When we caught up with Kristen recently at a Beverly Hills press junket, she dished even more about her weighty role, including why it was so much harder than "Twilight."

"The first movie was all about thrusting yourself into something and being impulsive," Kristen explained. "It was all about discovery and first love and abandon. And so that's like a little bit more thoughtless. I went to work. It was a more natural approach.

"'New Moon' was more labor-intensive," she admitted. "Because everything that we established in the first movie, we basically come in and say that [Bella] was just wrong. And so, that's how I start off the movie. As 'New Moon' begins, she knows that she's going to get broken up with, so it's this natural progression of seeing a girl who you saw being so confident in herself to something so daring and new to her," MTV.com reports.