In disaster kingpin Roland Emmerich's "2012" the year 2012 looks pretty much like 2009, except the governments of the world are scrambling to come up with a secret survival plan for humanity. Which they are going to need — stat! — because it's not too long before a few Los Angeles tremors make way for mega-quakes, lava-gushing volcanoes and tsunamis that no amount of human fortitude can combat. 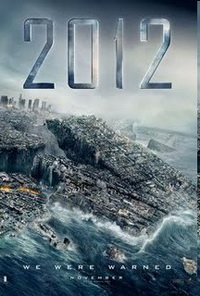 Into this apocalyptic mess comes John Cusack's struggling novelist Jackson Curtis, who has to rescue his ex-wife and kids while trying not to pee himself. The gleeful destruction wallops theaters on Friday (November 13), and it's up to you to prepare for the cinematic end-of-times: Hop aboard the pop-culture lifeboat that is MTV's "2012" cheat sheet, MTV.com reports.

It was also reported, even if most of the Earth were to be destroyed by a natural cataclysm predicted long ago by the ancient Mayans (or Hopis, or even the I Ching — take your pick), director Roland Emmerich would surely survive, if only to crawl back and polish off what little was left.

Emmerich's "2012" is in fact some snazzy digitalia: a monster tsunami crashing over the Himalayas; a spectacular White House takedown (yet again); and some monster-wave ship-twirling that's truly, uh, titanic. An L.A. freeway buckles and falls, Las Vegas craps out, and the coast of California rears up and slides right into the ocean. All that, plus lots of collapsing high-rise real estate, fireball storms and geysers of boiling black magma.

But there's an awful lot of this stuff; and since the movie is more than two and a half hours long — and since we are a nation of very jaded FX gluttons by now — surely there are some who'll find much of it grindingly monotonous. We should probably be grateful to Emmerich for not larding the picture with the endless eco-blather that burdened his last disaster special, "The Day After Tomorrow"; but this one is sprinkled with little We Are All One sermonettes that are almost as irritating, MTV.com reports.

Meanwhile, news agencies report, "2012" is directed by Roland Emmerich, who brought us "Independence Day," of the same genre, back in 1996.

"2012" is just hitting theaters now, and like the planet on which it takes place, has already exceeded its expiration date, San Francisco Chronicle reports.