At Tuesday night's BMI Country Awards in Nashville Taylor Swift's  hit single "Love Story" was recognized as song of the year by the publishing rights society. This can be sees as an indicator of how things will go tonight for her at the Country Music Assn. Awards, where she's going in with four nominations, including the top honor, entertainer of the year. 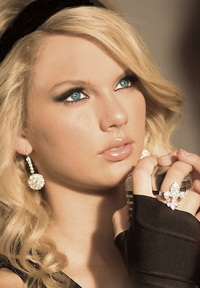 Having interviewed Taylor several times since she put out her debut album in 2006, I'm certain the BMI award was especially meaningful for her, because every time we've spoken she's made it clear that of all the facets of her still-unfolding career in music, songwriting is the thing she prizes the most.

You could hear it in her comment upon being handed the award: "I just want to say thank you to every songwriter and every loved one of a songwriter, thank you, because you are the reason I wanted to try Nashville," she said. "You are all my heroes." The Los Angeles Times reports.

Taylor Swift’s sweeping "Love Story", composed by Swift alone, was the first single from her sophomore album Fearless. In addition to topping the Billboard country chart, "Love Story" topped the Billboard pop and AC charts and became the best-selling country song in the United States and the most-downloaded country single in U. S. history. Published by Sony/ATV Tree and Taylor Swift Music, “Love Story” is Swift’s second consecutive BMI Song of the Year; “Teardrops on My Guitar” earned the prestigious honor in 2008.
Advertisement

With four songs among the year’s most-performed, Bobby Pinson earned the Songwriter of the Year crown. In addition to co-writing Sugarland’s chart-toppers “All I Want to Do” and “Already Gone,” Pinson co-composed Toby Keith’s poignant “She Never Cried in Front of Me,” and Josh Gracin’s nostalgic “We Weren’t Crazy.” The win marks the first Songwriter of the Year crown for Pinson, who has unquestionably become one of Nashville’s most in-demand collaborators.

The Country star looked dainty in a white mini dress with mega sleeves and a cascade at the waist.