Oscar-winners Gwyneth Paltrow and Nicole Kidman are to play husband and wife in an upcoming film about the world's first transsexual, it was reported Monday. 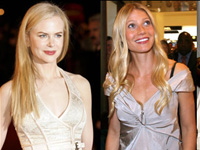 Einar Wegener, who will be played by Kidman, was a male artist who underwent groundbreaking surgery to become a woman in 1931 after pretending to be a female model in a series of successful portraits painted by Greta Wegener.

South African actress Charlize Theron had initially been pencilled in for the role of Greta Wegener until being replaced by Paltrow.

Kidman most recently appeared in Baz Luhrmann's romantic epic "Australia" last year and will next be seen in the musical "Nine."

Paltrow, who scooped an Academy Award for 1998's "Shakespeare in Love", was last seen in 2008 romantic drama "Two Lovers." Reported by AFP.