Thriller Which Fails to Scare

The critics panned the new movie, starring the habitue of horrors and space operas Milla Jovovich. Instead of scaring the thriller amuzes the audience and, actually, leaves much to be desired. 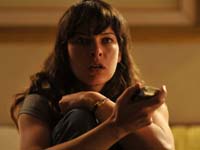 Thriller Which Fails to Scare

"The Fourth Kind," an unintentionally silly thriller about alien abduction whose title is the only thing it has over the classic "Close Encounters of the Third Kind." The fourth kind are ones in which the subject's body is physically carried off, often to be probed in ways that are far too horrible to describe.

The movie, written and directed by Olatunde Osunsanmi with a mix of "actual" and reenacted footage of events that supposedly transpired a few years ago to a psychotherapist named Abbey (Milla Jovovich).

"The Fourth Kind," to its credit, believes in a kind of obsessive subtlety. We never actually see the aliens. Nor do we ever see what exactly they do to their victims.

All we ever see are the abductees' therapy sessions during which, under hypnosis, they start whimpering and thrashing about until they have broken half the furniture in her office. Then they go home and kill themselves.

At a recent preview screening, the most common audience response to this nonsense was laughter, not gasps of horror.