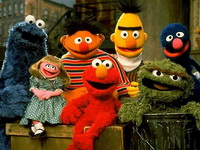 The landmark children's series helped establish PBS when it premiered on Nov. 10, 1969. Since then, it has appeared in over 140 different countries in many different languages. Grover, Cookie Monster and Big Bird have become as iconic as Bugs Bunny and Mickey Mouse, with millions of Tickle Me Elmo dolls finding their way under Christmas trees each December.

More important, the series is recognized as helping generations of preschoolers learn to read and count, all the while promoting awareness and diversity. It all sprang from a simple idea, put forward by Sesame Workshop (formerly Children's Television Workshop) co-founder Joan Ganz Cooney, who wondered, "if we can use advertising to teach children to drink Pepsi or go to McDonald's, why can't we use that attractive medium to teach kids letters and numbers?"

The series premiered days after Richard Nixon was elected U.S. president, months after the moon landing and a year after the assassinations of Martin Luther King, Jr., and Robert Kennedy. American society was churning and streets were places of protest and fear, The Canadian Press reports.

It was also reported, the cultural institution seen in 125 countries has changed and modernized over the years. The opening is no longer a realistic rendition of an urban skyline but an animated, candy-colored chalk drawing of a preschool Arcadia, with flowers and butterflies and stars. And the famous brownstones and garbage bins have let go of the messy graffiti and grit – now there are green spaces, tofu and yoga.

In addition to counting, the alphabet, and racial equality, colorful creatures also teach healthy eating habits. Michelle Obama appeared on Tuesday’s episode, preaching her love of veggies. “Veggies taste so good when they come fresh from the garden, don’t they?” she asked a group of children. “If you eat all these healthy foods, you are going to grow up to be big and strong,” she said. “Just like me,” Twirlit reports.

Meanwhile, a new illustrated behind-the-scenes, coffee-table book, "A Celebration: 40 Years of Life on the Street" (Black Dog and Leventhal Publishers), has been being published. It looks back at the 40 years of the actors, hosts, puppets, songs and scripts from the program.

Bob McGrath, who has played himself on the show since the first episode, says the show remains relevant because it is the most well-researched show in television history.

"We have great writers and a great research staff and directors and cast," he says. "And the cast is really like a real family. Nothing is taken for granted from one year to the next. It's been an incredible 40 years."