Rihanna: "It Could Happen to Anybody"

As singer Rihanna spoke on US TV for the first time about being assaulted by ex-boyfriend Chris Brown, she warned that "it could happen to anybody". 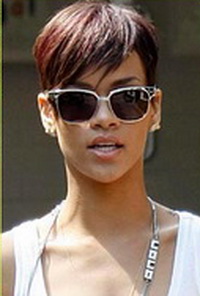 Rihanna: "It Could Happen to Anybody"

The 21-year-old, who was interviewed on ABC's Good Morning America programme, also called her brief reconciliation with Brown "embarrassing".

"I realised that my selfish decision for love could result in some young girl getting killed," she added.

It was also reported, in the interview, Rihanna, who is no longer with Brown, said she was ashamed to go back to him after the attack. "That's embarrassing — that's the type of person I fell in love with. So far in love, so unconditional, that I went back," she said. "That's not what I want to teach people."

The attack occurred in Los Angeles' Hancock Park neighborhood as Brown drove a rented sports car. A Los Angeles police detective described a brutal attack in a search warrant affidavit filed in the case, stating Brown hit, choked and bit Rihanna and tried at one point to push her from the car. A photo of her bruised face was circulated on the Internet. In an interview with Glamour magazine, posted online Tuesday, she said about the leaked photo, "I felt like people were making it into a fun topic on the Internet, and it's my life."

In her interview with "Good Morning America," Rihanna said she soon realized that, as a role model to young women, her returning to Brown sent the wrong message. "When I realized that my selfish decision for love could result in some young girl getting killed, I could not be easy with that part. I couldn't be held responsible for telling them, 'Go back,'" she said.

"I didn't realize how much of an impact I had on these girls' lives until that happened," she added. "It was a wake-up call for me, big time, especially when I took myself out of the situation," The Associated Press reports.

Meahwhile, Larry King asked Mariah Carey about Rihanna and Chris Brown's abusive relationship on his show this week. Carey told the talk show host that there were different kinds of abuse.

"Why is it hard to get out of it?" King pressed.

"Well, it's scary," she said. "You know, I just think you get into a situation, and you feel locked in if your situation is similar to one of the situations that I've been in which I won't harp on."

"For me, to really get out it was difficult because there was a connection that was not only a marriage but a business thing where the person was in control of my life," Carey added, The Los Angeles Times reports.