No Doubt Feels Strongly About Acvisition

Some of the world’s most popular and iconic artists have been featured in Guitar Hero as playable characters, and Activision was proud to count No Doubt among them.  But the band grudges it. 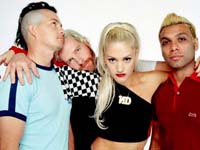 No Doubt Feels Strongly About Acvisition

The band filed a lawsuit against the game’s maker, Activision, today, for fraudulent inducement and breach of contract, among other complaints, in which they argue the group was turned into “a virtual karaoke circus act.”

The band’s manager, Jim Guerinot, tells reporters No Doubt were “mortified” to discover their likenesses could be used to sing songs by other artists. “They’re just like, ‘What? We didn’t sign up for this,’ ” he says.

The band also charges that each member of No Doubt can be isolated from the rest of the group and made to sing songs inappropriate for his/her gender. When the band brought their concerns to Activision, they allege the company “refused to correct its actions.” “An Activision executive asserted that [changing the game] would be ‘too expensive’ and would jeopardize their revenue,” according to the complaint.

Activision has responded that the suit is without merit, adding in a statement, “Activision has a written agreement to use No Doubt in Band Hero — an agreement signed by No Doubt after extensive negotiations with its representatives, who collectively have decades of experience in the entertainment industry.”

“No Doubt agreed to place avatars containing their name and likeness performing three No Doubt songs in the upcoming Band Hero,” the group said in a statement, asserting the avatars’ addition abilities were added “without the band’s knowledge or approval.”

The judge will have to sift out the truth from the conflicting testimony of the two parties.

Rolling Stone has contributed to the report.