Beatles Digitally Remastered Catalogue to Be Released on USB

Wednesday the Beatles announced Wednesday they will release their music catalog digitally in December. However, the group's songs are still not due for release on iTunes. 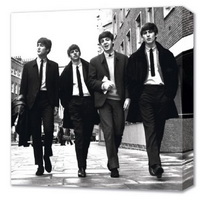 Beatles Digitally Remastered Catalogue to Be Released on USB

Apple Corps Ltd., the company owned by The Beatles, and EMI Music will release the digitally remastered catalog on Dec. 7 overseas and Dec. 8 in North America in digital form via Beatles Stereo USB apples. The limited edition product will have a run of only 30,000.

The product will have a "specifically designed Flash interface" that uses 16GB of capacity to provide the audio in both lossless FLAC 44.1 Khz 24-bit and MP3 320KBps formats. The product, which costs $279.99 or £200.00, is compatible with both PC and Mac, Apple Insider reports.

It was also reported, the new USB stick offers these some exciting features. You only get the stereo option, not the original mono versions. Besides, you get to pay $280, while the The Beatles Stereo Box Set costs just $180.

Of course, the apple-shaped USB stick has numerous advantages over the CD set, like being apple-shaped, for example. Just as the box set did, the stick will include 14 mini-documentary films about the studio albums, replicas of the original album art, rare photos, and expanded liner notes, Macworld reports.

Meanwhile, EMI said it had not authorized content to be sold on BlueBeat.com.

Beatles holding company Apple Corps Ltd. has so far declined to allow the Fab Four's music on any Internet music service, including iTunes.

Long-running negotiations between EMI and Apple Corps over making the band's catalog available online have stalled, although EMI said the talks are continuing.

BlueBeat is owned by Santa Cruz, California-based Media Rights Technologies. The company could not immediately be reached for comment, BusinessWeek reports.