Brad Pitt is looking for a new motorcycle in Japan. 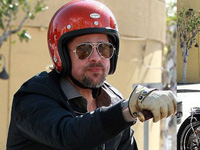 The actor, in Tokyo to promote his latest movie, "Inglourious Basterds," said he trashed his favorite bike recently while trying to escape overzealous photographers.

"I had a little mishap," he said. "No injuries, except my ego. I was trying to get away from some paparazzi and instead gave them a good story. It was my favorite bike, so that is really sad."

Pitt, a well-known motorcycle buff, said that while he is in Tokyo he will be looking for a replacement.

"Inglourious Basterds," directed by Quentin Tarantino, premiered in Tokyo on Wednesday. As a promotion gimmick, Japanese movie viewers will be given a money-back offer if they are bored after watching the first 60 minutes of the revisionist World War II swashbuckler.