One more U.S. celeb couple  receives congratulations on the birth of new sweet creature coming to the world this autumn. 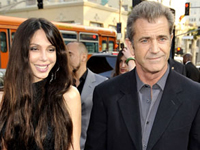 This is the couple's first child together, though it is Gibson's eighth and Grigorieva's second kid.

The new bundle of joy comes after a whirlwind year for Gibson, 53, and his 39-year-old girlfriend.

In April, Gibson's wife of 30 years, Robin, filed for divorce, just weeks before the actor and Grigorieva made their first public appearance as a couple on the red carpet at the Los Angeles screening of "X-Men Origins: Wolverine."

Grigorieva, an accomplished musician, recently dismissed marriage rumors, and instead, says she will be focusing on her new baby.

It may be rather peculiarly but the couple has not yet planned wedding, according to New York Daily News report.