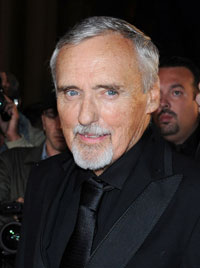 Hopper is being treated in a special program at the University of Southern California, according to CNN news affiliate KTLA.

He was expected to appear at an exhibition of his photography at the Australian Centre for the Moving Image in Melbourne but has cancelled in order to focus on treatment.

"We're hoping for the best," Maydew said. No other details were immediately available.

On September 30, Hopper was hospitalized in New York for flu-like symptoms and stomach pains. He was released the next day feeling "much better," according to KTLA.

The 73-year-old Academy Award winner is known for his roles in "Rebel Without a Cause," "Hoosiers," "Apocalypse Now" and "Easy Rider" -- the latter of which he also directed -- among scores of other films, CNN reports.