A judge Friday ordered the boyfriend and two doctors of Anna Nicole Smith to stand trial on charges of fueling the actress and Playboy model's addiction to prescription drugs, leading to her fatal overdose in 2007. 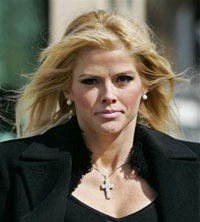 Superior Court Judge Robert Perry handed down his ruling after admitting as evidence a 2006 video of Smith painting her face like a clown at a child's birthday party, though he admitted uncertainty as to whether that showed her under the influence of drugs, New York Post informs.

In rendering his decision, Perry said the witness accounts and medical files persuaded him that Smith was a drug addict and that there was "an ongoing and widespread effort" to obtain medication for her. The judge noted, however, that the standard of proof prosecutors had to demonstrate at the hearing was "very minimal" and far below that required for a trial conviction.

"I do find the people have met the test of convincing this court that there is strong suspicion the defendants committed the acts," Perry said.

A trial for defendants Howard K. Stern, Dr. Sandeep Kapoor and Dr. Khristine Eroshevich probably will begin next year and last two to three months, according to a prosecution estimate. The trio face potential prison sentences if convicted of conspiracy and other felonies related to violations of health and business codes governing prescriptions, The Los Angeles Times informs.

Witnesses who testified during the preliminary hearing included a pharmacist who said that he refused to fill a prescription written by Eroshevich because the high doses of medication amounted to "pharmaceutical suicide."

Also in court, a witness read the following from a June 13, 2005 entry in Kapoor's journal: "I was making out with Anna, my patient, blurring the lines ... I gave her methadone, Valium. Can she ruin me?"