Taylor Swift and Taylor Lautner have been spotted together getting meals and going to hockey games, and Lautner was spotted at Swift's Chicago concert earlier this month. 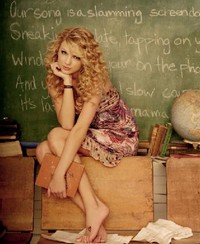 Other than praising each other in interviews, however, they've never actually let on that they might be something more than friends. But according to People, in a new interview with CMT Radio Live's Cody Alan that will air on Thursday (October 29), Swift danced around the question instead of denying that there's any romance going on between the country superstar and the "Twilight" werewolf.

"I don't know, he's an amazing guy and we're really close ... and ah ... yep," she said, at least admitting that she's on Team Jacob, as far as "Twilight" goes. "We're in a movie together, and I am really excited about seeing it."

She said she has yet to see any of "Valentine's Day," but she hopes to get a "private screening" with Lautner, "because we both want to see it so bad, 'cause our scene was so much fun to do. It was hilarious doing this scene!" MTV.com reports.

It was also reported, the 19-year-old singer sat down with Ellen DeGeneres for an interview that is set to air Thursday, and found herself on the hot seat. After establishing that Swift shares scenes with the Twilight hottie in the upcoming romantic comedy, DeGeneres shows a picture of them kissing.

"What's happening there. Is that part of the movie?" asks the talkshow host. Swift confirms it's an on-screen smooch, but later gets chided for playing "coy" when pressed on whether Lautner is a "good kisser."

"I really like hockey a lot and it turns out so does he," Swift responds, People Magazine reports.

The Taylors were spotted enjoying a shopping date at the Alice & Olivia boutique on the notorious paparazzi hang out Robertson Blvd last night (October 28) in Los Angeles.

They tried ignoring the flashbulbs as they shopped, but paid very close attention to each other. They left together in Lautner’s car, smiling the whole way, Neon Limelight reports.