Answering what she described as "any and all reasonable questions" on the Monday episode of "Jon & Kate Plus 8," Kate Gosselin refuted allegations she and her husband Jon staged their renewal of vows in Hawaii. She insisted that her kids were OK on the show — and she left the door open for a second marriage. 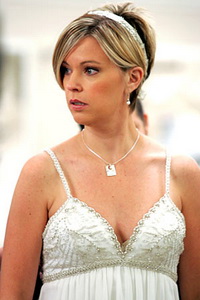 Despite all the troubles being a reality-show star has brought her, Kate also said she wants to stay in the limelight even after her show goes off the air, msnbc.com reports.

It was also reported, although there has been no official announcement from TLC execs, the planned spinoff series titled just “Kate Plus 8” will not return next week as originally scheduled, since Jon has exercised his parental rights to halt any further taping of his eight children.

For those of you who still want to watch cutesy shows about the kids visiting horse farms and petting zoos (and there aren't too many of you left), there is still a chance that the show will be continued in the future, pending the results of a breach of contract suit that TLC has filed against Jon.

But I wouldn't hold my breath, though I am sure that “Jon & Kate Plus 8” reruns will continue for years to come…as long as the ratings hold up.

In all probability last night's Kate interview was really an audition by Kate for her own talk show. And Kate somewhat confirmed that prospect. When asked about her future career plans, since she certainly needs a large income stream to support her eight kids and the upkeep for their million dollar estate, Kate played down any possible return to her former nursing career, Seacoastonline.com reports.

News agenciea also report, in the past week, Jon Gosselin has returned the thousands of dollars he secretly snuck out of his and wife Kate Gosselin's bank account, and he has reunited with Kate's brother and sister-in-law.

It turns out Jon Gosselin is on a major press offensive that's planned to continue for weeks to come, in which he will try paint soon-to-be-ex Kate as a bad mom, and himself as a hapless victim, Fox411 has learned.

But for all the behind-the-scenes machinations taking place, it turns out the main player is not even the main man behind the PR strategy, says a source inside the Jon and Kate Gosselin drama.

The insider tells Fox 411 that Jon is simply doing whatever his "team" recommends. Jon's backers include girlfriend Hailey Glassman (daughter of Kate's plastic surgeon), his publicist, lawyers and even Lindsay Lohan's dad, Michael Lohan. They have convinced Jon that the best strategy going forward is to continue to make Kate look like the controlling woman he thinks she is by constantly calling the paparazzi and speaking to the cameras, says the source, FOXNews reports.