In New York theater insiders have been wondering for months exactly how David Cromer, Chicago director, would stage "Brighton Beach Memoirs" and "Broadway Bound," which will run in repertory under the heading "The Neil Simon Plays." 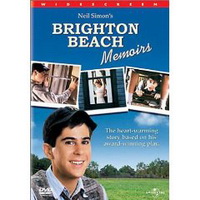 "Brighton," which opened Sunday night, won't fully satisfy Cromer's fans in that he has imposed no new spin on Simon's nostalgic comedy-drama. But the production does illustrate Cromer's particular talent for getting to the emotional heart of whatever he tackles.

This mainly well-acted production is a more sober rendition than the original 1983 Broadway staging, which starred Matthew Broderick and ran for more than three years. While not neglecting the laughs, this is a harsher, darker version that might not prove as crowd-pleasing, ABC News reports.

It was also reported, to get a most endearing glimpse into the fumbling rites of passage for guys on the verge of manhood, look to the terrific interactions of Noah Robbins and Santino Fontana in Broadway's handsomely crafted new revival of "Brighton Beach Memoirs."

Robbins and Fontana portray the alternately cantankerous and commiserating teenage brothers in the new staging of Neil Simon's 1983 autobiographical comedy that officially opened Sunday night at the Nederlander Theatre, under the precision guidance of director David Cromer.

It feels like an eternity since a work by Simon has received this level of trenchant treatment in New York. (A revival of his Pulitzer Prize-winning "Lost in Yonkers," at Washington's Theater J, will be reviewed later this week.) And it also seems as if there's suddenly a welcome mat out on Broadway for vintage comedy, what with the opening recently at Manhattan Theatre Club of an often enjoyable revival of "The Royal Family," George S. Kaufman and Edna Ferber's screwball slice of theatrical life.

The new production of that classic 1927 comedy, about the daft members of a teetering Broadway acting clan, doesn't achieve consistent buoyancy, except when it is floating on the talents of the remarkable Rosemary Harris and Jan Maxwell, as an elderly mother and middle-aged daughter who can't seem to get drama out of their systems. And even though some other performances feel too contemporary, it's quite fun being immersed in the play's frothy machinations, in the vanity and pettiness of the Cavendish family and the tornadoes they whip up out of mere breezes, The Washington Post reports.

News agencies also report, it was with "Brighton Beach," that Simon, author of such popular comedies as "The Odd Couple," "Barefoot in the Park" and "The Sunshine Boys," moved on to more ambitious themes.

"Brighton Beach Memoirs" is the first in a trilogy of vaguely autobiographical plays following the adventures of Eugene. It was followed in 1985 by "Biloxi Blues," with Eugene serving in the Army during World War II, and then "Broadway Bound" (1986) as Eugene tries to make it in show business as a comedy writer.

This season Broadway will get two-thirds of the trilogy as "Broadway Bound" joins "Brighton Beach" in rep at the Nederlander. It opens there Dec. 10 and with much of same cast, including Metcalfe, Boutsikaris, Hecht and Fontana. An important change: Josh Grisetti will portray the adult Jerome. Let's hope he will be a worthy successor to the irrepressible Robbins, The Associated Press reports.