The famous actress, known for her good acting and bravity at shooting naked, kissed a girl in real life for charity. 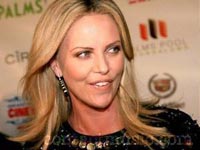 Charlize Theron's liplock went for $140,000 at a charity auction for the organization OneXone Thursday night in San Francisco.

The  South African actress, 34, appeared at a live auction event and gala for the group, which works to improve the overall health and living conditions of children in poor countries.

Theron at first offered a 2010 South Africa trip - complete with World Cup tickets, a safari trip and a chance to meet Nelson Mandela.

When bidding lagged at $37,000, Theron reportedly raised the stakes by tossing in the kiss and the bidding war began.

A female attendee outbid a man in the audience by $5,000 to win the kiss.

New York Daily News  has contributed to the report.