'Miss Julie' Is Refreshed not Altered

The British playwright Patrick Marber, who wrote one of the most corrosive recent depictions of the battle between the sexes with "Closer," would be fascinated by August Strindberg's 1888 classic that broke ground in dealing with the same themes. 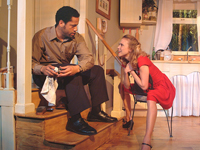 'Miss Julie' Is Refreshed not Altered

But his adaptation of "Miss Julie," with the action updated to 1945 on the eve of the historic election that brought the Labor Party to government, doesn't really add much of substance to the original.

Although "After Miss Julie" manages to up the ante in terms of sexual explicitness and language, its points about class and sexual warfare seem, if anything, more obvious than in the original. The story still has an undeniable power, but the overall effect feels more akin to a playwriting exercise than a deeply felt re-exploration.

As before, the play revolves around the charged encounter among the title character (Sienna Miller), a rich young woman who has been left in charge of her father's country estate; John (Jonny Lee Miller), a chauffeur and former soldier; and Christine (Marin Ireland), the religious household cook to whom he is engaged.

Still, the evening has its fascinations. In a more modern context, the psychological gamesmanship takes on an even deeper resonance, according to Reuters' review.