Uma Thurman Fails to Gain Sympothy in a New Movie

Uma Thurman has already played mother. But roles differ. Unlike brave mother of 'Kill Bill' her mother in 'Motherhood' does not excite  admiration. 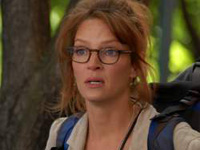 Uma Thurman Fails to Gain Sympothy in a New Movie

Much of what writer/director Katherine Dieckmann has created has been shown in sitcoms or in bits and pieces of other films. Though the scenarios may be more extreme, they feel familiar and don't offer any new insights into the joys, sorrows and craziness of being a mom.

Casting also is a problem. Thurman seems an odd choice for the role, and she isn't fully convincing. Perhaps someone with better comic timing, such as Tina Fey, could pull it off better. Or someone who comes across more personable and easier to identify with, such as Jennifer Garner.

Eliza is often self-absorbed, prickly and annoying. Her best buddy, Sheila, is dully played by Minnie Driver. Anthony Edwards has a thankless part as Avery, Eliza's absent-minded husband, though the more credible scenes are between the two of them.

The couple live in a pair of rent-stabilized apartments with their two children. Eliza used to write fiction, and now, in an effort to focus more on her domestic life, she writes a blog called "The Bjorn Identity." In it she poses rhetorical and obvious musings like, "Must a woman's soul wither and die simply because she has children?"

When a film is this talky, the dialogue has to be consistently clever or at least authentic. Such is not the case here. There are occasional witticisms that work: "I want to finish the laundry — and a complex sentence," Eliza writes.

Those who have raised children can sympathize with her. The life of a working mom is challenging and sometimes frantic. But Eliza — and the movie — lack perspective: She has a loving husband, healthy, sweet children, a nice home and enough money to live well. So what if she has to move her car because of the city's bothersome parking regulations?

Ultimately, Eliza may be relatable, but she is neither likable nor interesting enough to build a movie around.