The film, which mixes live action and animation, is based on the children's book by Maurice Sendak, but audiences were predominantly made up of adults. 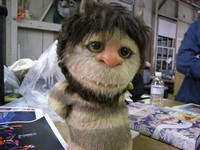 The film - shot in the style of a documentary - is said to have made a box office impact due to word-of-mouth interest and has been compared to 1999 hit The Blair Witch Project, BBC News reports.

It was also reported, film director Spike Jonze told the tale of Max, an unruly child with a wild imagination, allowing viewers a more in-depth look into his life than the 338 words the book provided.

Max, played by Max Records, is more than just a child sent to bed without dinner. We are invited into his life and see that the child is coping with divorced parents, an over-worked mom and a sister who has outgrown him. Max is constantly trying to find his place in the world and has problems doing so.

After an altercation with his mom, Max runs from his house, donning the famous wolf suit, and sets sail into the great unknown, finding himself in a magical land where he is made king of an odd assortment of animal-like creatures. In what starts as an anything-goes kingdom, Max quickly finds himself confronted by many of the problems from his home world.

Jonze’s decision to skip computer-generated imagery and use actual costumes and puppets for the “wild things” was the right call, and allowed genuine interaction between Max and his subjects. Computer-generated imagery uses computer graphics in movies, and, in this case, would have led to Max being filmed in the scenes in the unknown world alone with the monsters being added later, Kansas State Collegian reports.

It was also reported, " Where The Wild Things Are ", is one movie that works best for kids young enough to give themselves over to the emotional storminess of childhood and people old enough to look back romantically on all that chaos. Okay, PopWatchers, are you buying my arm-chair analysis WTWTA’s kid-friendliness? Since the movie has already made $32.4 million this weekend, some of you must have taken your kids, Entertainment Weekly reports.