A lock of Elvis Presley's hair sold for $15,000 to an anonymous telephone bidder at a Chicago auction Sunday. The locks were part of an Elvis memorabilia collection offered by Leslie Hindman auctioneers in Chicago. The collection, which belonged to former Presley fan club president Gary Pepper, includes stage clothes, records and Christmas cards. 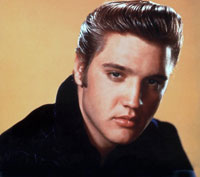 Pepper died in 1980 and left the collection to his nurse, who is now putting it up for sale. Estimates had put the sale price of the hair at between $8,000 and $12,000, according to NDTV.com

A clump of hair believed to have been trimmed from Elvis Presley's head when he joined the Army in 1958. Also among the 200 Elvis-related items up for grabs at the Leslie Hindman Auctioneers in Chicago on Sunday was a shirt that once belonged to the King which sold for $52,000.

The buyer of the hair paid $15,000 plus an additional $3,300 in auction house fees, The Associated Press reports.

All the items had belonged to the late Gary Pepper, who ran a fan club and was a friend of the singer. One buyer snapped up a set of concert-used handkerchiefs for $732 (£450) including auction house fees, while photos from the reception of Presley's 1967 wedding to Priscilla, sold for nearly $6,000 (£3,700).

Chicago's Leslie Hindman auctioneers did not provide details of the people who purchased the items. Pepper, who had cerebral palsy, died in 1980. A portion of the proceeds from Sunday's auction will go to United Cerebral Palsy of the Mid-South, reports BBC News.