Garth Brooks Says He Is out of Retirement

Thursday the best-selling solo musician in U.S. history Garth Brooks said he was coming out of retirement. The singer is expected to announce an extended concert run at the Wynn Las Vegas casino and hotel. 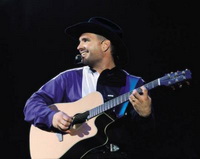 Garth Brooks Says He Is out of Retirement

"I know this is a young industry, so I'm not sure I'll be welcomed back but, if the fans want me, I still want to pursue my music," Brooks told reporters at the Grand Ole Opry House in Nashville.

A two-time Grammy winner and winner of 11 Country Music Association awards, Brooks' brand of rock-tinged country music topped the charts in the 1990s. He has sold 113 million albums, putting him second to the Beatles in all-time U.S. sales.

Brooks, 47, hired a private plane to transport reporters to an unnamed site where he will announce his immediate plans, Reuters reports.

Following the announcement in Nashville, Brooks shuttled approximately 40 members of the news media to the Nashville International Airport for a private flight to an undisclosed location for the afternoon press conference.

During the Nashville press conference, Brooks also advocated expanded unionization within the music industry and the need for artists, songwriters, publishing companies and record labels to protect their copyrights on songs and recorded music.

"We need to take back the music," Brooks said. He added, "We don't realize how powerful we are. [Former Capitol Records Nashville chief] Jimmy Bowen told me that once, and he was absolutely right."

Brooks alluded to the possibility of strong measures to prove the point, CMT.com reports.

It was also reported, in the 1990s Garth Brooks also was one of the most popular concert attractions in the world. Amusement Business magazine ranked his 1996 tour the biggest country music tour in history after he sold 1.8 million tickets that year.

“I think Garth is a huge attraction,” says Gary Bongiovanni, editor of the concert tracking magazine Pollstar. “He could go headline arenas right now if he wanted to.”

Brooks, widely regarded as one of country music’s savviest businessmen, also was looking ahead, knowing that no act stays at the top forever and eyeing a new crop of young male stars such as Kenny Chesney and Keith Urban on the rise as the new millennium dawned. So he chose to bow out while he was still riding high.

"I have respect for artists who keep making music their entire life, but I don't want to ride that downside of the [sales] curve," he said in 1996. "You want to be remembered at your best," The Los Angeles Times reports.