The Canadian singer-songwriter Avril Lavigne has filed for divorce from her musician husband after three years of marriage. 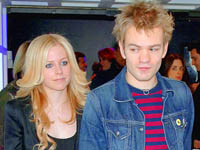 The couple were married in July 2006 and have no children together. Lavigne cited "irreconcilable differences."

Lavigne is asking a ruling to block Whibley from receiving spousal support.

Court records show Whibley was granted a request to add Lavigne's last name to his name in December 2007.

Lavigne, also noted as fashion designer, and actress, has sold more than 30 million copies of her albums worldwide. She is currently one of the top-selling artists releasing albums in the United States, with over 10.25 million copies certified by the Recording Industry Association of America. She has been dubbed as the 'pop-punk princess' by various sources.

Lavigne broke into the recording industry with her debut album, Let Go, released in 2002. As of 2009, over 16 million copies were sold worldwide, more than 6 million of which were sold in the United States. Her second and third album, Under My Skin and The Best Damn Thing, reached number one on the Global charts. Lavigne has scored five number-one singles worldwide, including "Complicated", "Sk8er Boi", "I'm With You", "My Happy Ending" and "Girlfriend". She is currently working on her fourth studio album, due out in early 2010.