Filippa Hamilton, who was surprised to see an advertisement with her distortered photo, on which her body was  digitally slenderized,   has not yet decided whether to sue Ralph Lauren  for violating the authority rights. 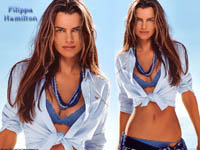 Polo Ralph Lauren Corp. is contending that it dismissed Filippa Hamilton because of a contract dispute and that the photo was mistakenly released.

"They fired me because they said I was overweight and I couldn't fit in their clothes anymore," 23-year-old Filippa Hamilton, who worked for the company since she was 15, said in an interview. The girl imparted that she considered Polo Ralph Lauren her second family.

The company acknowledged in a statement that the image of Hamilton that appeared last week in a Tokyo mall had been digitally altered.

She went public after the photo surfaced.

Hamilton, a New York resident who is half-Swedish and was raised in France, has been looking for another job since she was let go in April, said Jesse Derris, her spokesman at Sunshine Sachs & Associates.

"I saw my face on this super-extremely skinny girl, which is not me; it's not healthy, it's not right," she said. The model added that the emaciated depiction of the girl's figure perverts the notion of ideal body, urging woman to follow exhausting diets and exercises.

Polo Ralph Lauren claimed she "was too large," she added, saying that she's a size 4 and that her weight has remained constant during eight years as a model for the iconic American brand, which has dressed U.S. Olympic teams.

In recent years, designers have typically sought models that fit into clothes that are a size 4, or even 2 or 0.

Polo Ralph Lauren released a statement that read: "We take full responsibility. This error has absolutely no connection to our relationship with Filippa Hamilton," who is a "beautiful and healthy" woman.