A fingerprint helped experts to detect the author of  a 15th-century portrait. The researchers ascribe the art work to the  Italian Renaissance artist Leonardo da Vinci. 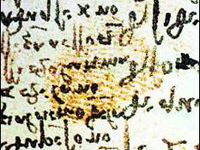 Found near the top left of the portrait, the fingerprint is "highly comparable" to a print on da Vinci's St. Jerome in the Vatican.

The portrait was sold at Christie's Old Master Drawings sale in New York in 1998, as a Young Girl in Profile in Renaissance Dress.

Forensic art experts say the print corresponds to the tip of the index or middle-finger and the drawing and hatching were works of a left-handed artist, as da Vinci is known to have been.

Studies also revealed "significant" stylistic similarities between the new painting and da Vinci's Portrait of a Woman in Profile, which hangs in Windsor Castle.

Da Vinci expert at University Martin Kemp believes the teenage woman of the portrait could be Bianca Sforza, daughter of Ludovico Sforza, Duke of Milan (1452-1508).

The painting will be displayed in an exhibition in Sweden next year, according to PRESS TV's report.