Michael Jackson's three kids are to start their TV Show career in a new reality series, according to the reports. 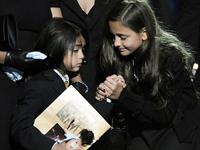 Prince Michael, 12, Paris, 11, and Prince Michael II, 7, are set to appear alongside other relatives in "The Jacksons: A Family Dynasty," an A&E series slated to debut in December.

The decision to have Michael's children on the show, is causing tension in the family with eldest sister Rebbie refusing to appear on it.

"(She) feels Michael would spin in his grave if he knew his kids would be on this show," a source told the magazine, adding Michael's sister, Janet, will be involved in the series, while matriarch Katherine "is just going along with things."

Katherine has had custody of Michael's children since the pop icon died June 25 at the age of 50. Michael took great pains when he was alive to protect his children's identities and they were seldom seen in public without masks covering their faces. His July memorial service marked the first time any of the children were heard speaking in public. They have been frequently photographed by the media since then, according to United Press International's report.