The founder of the Unification Church, Sun Myung Moon, held his first mass wedding ceremony in years on Wednesday, blessing 20,000 people from around the world at a college he founded. 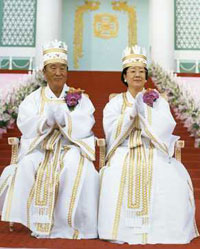 Moon, who founded the church officially called the Family Federation for World Peace and Unification, and his wife were on hand for the mass ceremony, where 1,000 couples took their wedding vows and another 18,000 renewed their vows.

"As men and women representing the 6 billion mankind, go out and become the builders of the world of peace and ideals," Moon told the couples gathered on the sprawling grounds of the Sun Moon University, about 100 km (60 miles) from Seoul, Reuters informs.

Today's event came nearly 50 years after Moon arranged the marriages of 24 couples in his first mass wedding here. Since then, he weathered numerous sex scandals as his Unification Church has been criticized as a cult that brainwashes followers, who are often referred to as "Moonies."

"Mr. Moon calls himself a Messiah, for goodness sake," said Tark Ji-il, a religion professor at Busan Presbyterian University in Korea. "Through his sexual relationships, he has claimed that he can cleanse the dirty blood of humankind."

As a result, he added, "Mr. Moon was involved in many sex scandals, and was blamed for being unethical." But Moon is better known for something else, Tark said: "He symbolized and ritualized the wedding." Experts say there is practicality to Moon's mass marriages, Los Angeles Times reports.

Similar mass weddings, although smaller, took place around the world on Wednesday. The Seoul ceremony, which lasted 90 minutes, was broadcast on the Internet.

Mr. Moon’s mass weddings are one of the best-known and most controversial features of the Unification Church, which espouses “trans-religion, trans-national, trans-racial” harmony.

He began the group weddings in the 1960s, marrying a few dozen couples at a time. Some 2,500 church couples exchanged or affirmed their vows in November of 1997 in a ceremony at RFK Stadium in Washington. A crowd of nearly 40,000 turned out for that event, which was to include a Whitney Houston concert, although the singer canceled just hours before the show, citing illness.

During Wednesday’s ceremony, the largest of its kind in a decade, brides in white gowns or traditional wedding costumes from their home countries stood in rows with grooms mostly in black suits. They bowed to Mr. Moon and his wife, Han Hak-ja, before Mr. Moon led three cheers at the end of the ceremony, New York Times reports.