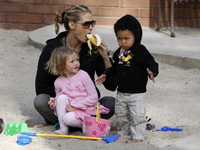 The very proud father singer Seal spoke to Modelinia about the families new arrival.  "She is beautiful beyond words and we are happy that she chose us to watch her grow over the coming years."

Reports circled the internet with speculation that Klum was in labor very early Friday morning, but those claims were soon disputed by sources.  Klum did end up giving birth at 7:46 PM, however.

Klum and Seal have three other children who will no doubt welcome their new sister with open arms.  This weekend, Henry,3,  Johan, 2, and Leni, 5, all headed to the pumpkin patch for some fall fun.

Examiner.com  contributed to the report.