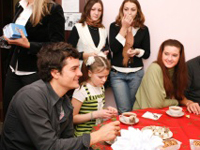 Orlando Bloom has been named as  a goodwill ambassador by UNICEF in recognition of his commitment to children's rights around the world.

Best known for his  top-notch roles in the "Pirates of the Caribbean" and "Lord of the Rings" films, he has participated in UNICEF's movement since 2007, when Orlando first visited schools in impoverished districts of Nepal.

UNICEF said Monday that as its ambassador, Bloom intends  to focus on raising awareness of the global organization and advocating for needy children worldwide.

Past ambassadors include such celebrities as Audrey Hepburn, Roger Moore, David Beckham and Vanessa Redgrave.