Usually when Vince Vaughn stars on the big screen, he typically steals the spotlight. And though the funnyman certainly ruled the box office this weekend with his comedy "Couples Retreat," all eyes are on another movie's theatrical success story. 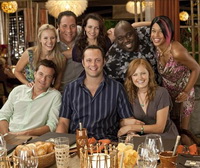 The surprise hit of the weekend was none other than the fifth-place-finishing "Paranormal Activity," a horror flick directed by Oren Peli that was filmed entirely with a handheld camera. Produced on a meager budget of less than $16,000, "Paranormal Activity" actually debuted on September 25 but only at midnight showings at a handful of theaters. But thanks to the collective voice of horror fandom, Paramount was convinced to give the movie a wider release this weekend — and the results speak entirely for themselves, MTV.com reports.

It was also reported, by Sunday night, according to early estimates, "Couples Retreat” will have earned $35.4 million, the top gross ever for a movie on Columbus Day weekend.

It was also reported, there are movies that people simply have to see. Paranormal Activity, made three years ago for a no-budget $11,000 — yes, thousand — is the new overnight sensation. Opening two weeks ago at midnight shows in 16 college towns, Oren Peli's haunted-house thriller expanded Friday to full playdates at 159 venues and scared up a phenomenal $7.1 million. That's $44,475 per screen, making this the highest-ever average for a medium-size release. Paramount Pictures' clever viral media campaign helped, but credit the movie's breakout status to old-fashioned word of mouth and newfangled word of thumb. Twitter strikes again.

With no new wide-release competition in their respective genres, last week's top three all slipped down just one notch. Zombieland dropped a less-than-expected 39%; the surprise CGI-animation hit Cloudy With a Chance of Meatballs slipped a mere 24% to inch near the $100-million mark; and the 3-D double bill of Pixar favorites Toy Story and Toy Story 2 fell 39%. The weekend should reach a cumulative $100 million. That will leave the box office 8% ahead of last year at the same time in revenue and 4% ahead in attendance, and making movies one of the few big businesses to flourish in the Great Recession, TIME reports.

News agencies also report, Couples Retreat comes with a definite sigh of anguish when you look at the talent on display. Vaughn (though his humor has worn out its welcome for me), Jason Bateman, Jon Favreau, Kristen Bell and Kristin Davis have all proven themselves capable of being able to carry good comedy through a movie.

The film, written by Vaughn, Favreau and Dana Fox, suffers from one tired cliché after another. Vaughn must have had a great time on the script thinking of his next witty digression. These little quibs worked wonders in "Wedding Crashers" because they weren't overly contrived. These are so far removed from the way that people talk that it just gets boring.

Peter Billingsley has created a film that has no heart. It is a stagnant and vapid piece of filmmaking. For a beautiful exploration of the way of modern couples seek out "Away We Go," which is Sam Mendes' tender, wildly funny and bittersweet look at what can make a relationship last: love. There is no love here, and because there is not any, what do we have to root for? The University of Alabama Crimson White reports.