Mueller, born in Romania's Transylvania Banat region, was honored for work that "with the concentration of poetry and the frankness of prose, depicts the landscape of the dispossessed," the Swedish Academy said. 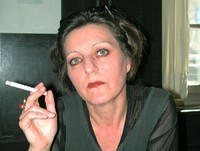 "I am very surprised and still can not believe it," Mueller said in a statement released by her publisher in Germany. "I can't say anything more at the moment."

The decision was expected to keep alive the controversy surrounding the academy's pattern of awarding the prize to European writers.

It was also reported, in 1987 she emigrated to Germany with Richard Wagner, her husband who is also an author.

The novelist, essayist and poet, who will receive $1.4m as part of the award, was also praised for writing with "the concentration of poetry and the frankness of prose".

Born in 1953, Mueller worked as a translator in a machine factory in the late 1970s.

She was dismissed when she refused to work as an informant for the Romanian secret police, Aljazeera.net reports.

News agencies also report, the very first Nobel Prize in Literature was awarded in 1901 to the French poet and philosopher Sully Prudhomme, who in his poetry showed the "rare combination of the qualities of both heart and intellect."